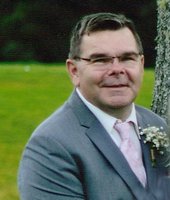 It is with profound sadness that the family of RCMP Staff Sergeant, Bruce Alexander Reid, husband of Lori Wilson Reid, announce his passing which occurred on Friday, October 25, 2019. He was born in Saint John, son of the late Cecil and Frances (Wells) Reid.

Bruce’s passion was for his family and policing. He was extremely proud of his children, Lisa and Cameron. His contagious smile was even brighter when spending time with his granddaughter Sophia (Papa’s Doll), and he was thrilled to be expecting another grandchild.  He adored his wife, Lori, and loved his step-children and step-grandchildren as his own. Bruce was dedicated to his career in policing but always looked forward most to his annual time spent cruising in the Caribbean with Lori. When not cruising, they enjoyed kayaking on the Hammond River and bird watching in their backyard.

Bruce’s interest in policing began in high school where he was a leader in the Operation Identification Program. He went on to have a 38 year career where he spent five years with the Saint John Police Force and 33 years with the RCMP. He had fond memories, friends and colleagues from each detachment where he served, including Prince George, Toronto, St. Catharines, Doaktown, Fredericton, Halifax, Souris, Sussex, and Saint John. As he rose through the ranks in the RCMP, he particularly cherished his time as Detachment Supervisor in Souris and Sussex.

Bruce loved sports and served as captain on most of his teams. He was named athlete of the year at KVHS and continued to excel in hockey, playing Junior A and Senior hockey in Saint John. He combined his love of sports and policing in 2010 when he had the opportunity to Police at the Winter Olympics in Vancouver. When not playing sports, Bruce treasured his time at the Reid camp on the Belleisle Bay with friends and family.

Bruce had a great sense of humour and loved to joke around but was also compassionate, sensitive, and had a heart full of love and forgiveness. Though we miss him immensely, we know he is now at peace.

Resting at Kennebecasis Community Funeral Home, 152 Pettingill Road, Quispamsis (849-2119). Visitation will be held on Tuesday, October 29, 2019 from 2-8pm. A Mass of Christian Burial will be celebrated at Our Lady of Perpetual Help Church, 31 Gondola Point Road, Rothesay on Wednesday, October 30, 2019 at 11am. For those wishing to make a donation in celebration of Bruce’s life, contributions can be made to the Canadian Mental Health Association of New Brunswick or Bobby’s Hospice.