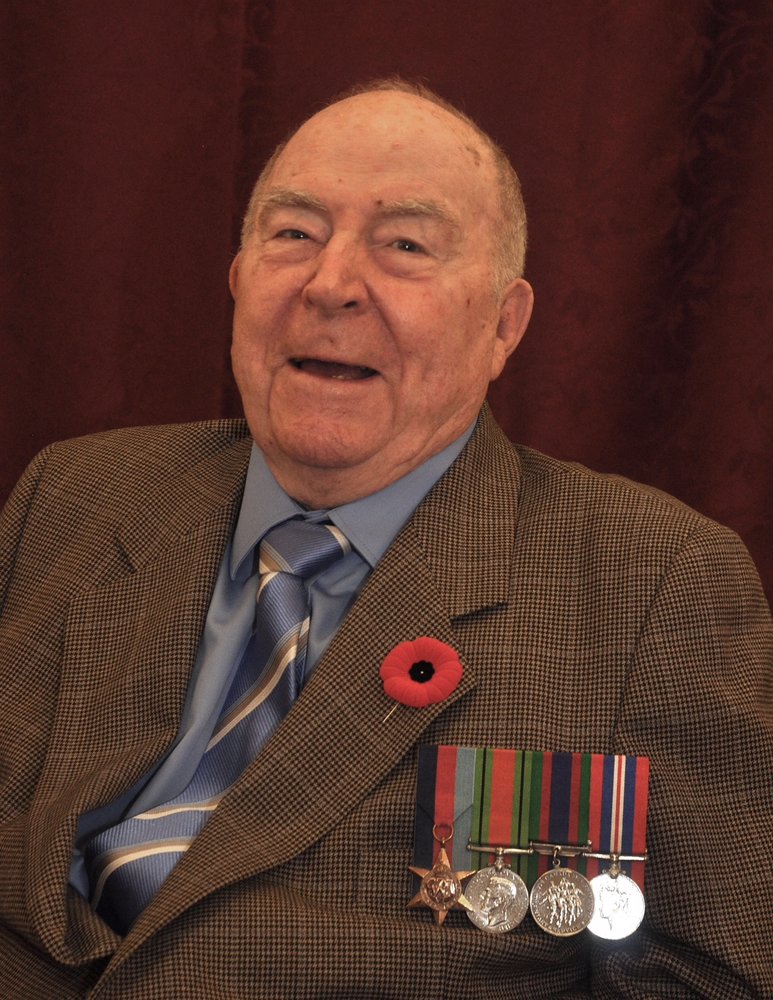 Harriott, Lennox Age 94, of Rothesay. It is with broken hearts that our family announces the peaceful passing of our loving and devoted father, grandfather and great grandfather on March 29, 2019 at the Ridgewood Veterans Wing in Saint John.

Born in Isleworth, England on September 17,1924. He was the son of the late Annie (Brown) and Alfred Harriott. He was predeceased by his loving wife of almost 70 years Kathryn in April 2016.

He graduated from Hampton High School in 1942 and was awarded the Governor General and Literature Medal. He was an avid soccer player and in his Graduation year his team won the Provincial Soccer Championship.

He joined the Royal Canadian Navy after graduation in August 1942 as a Telegrapher serving on the San Katy, Monnow and Gifford sailing the treacherous Atlantic Ocean run from St. John’s, Newfoundland to Londonderry until the end of the war. He served his country with pride.

After the end of the War he attended UNB and married the love of his life Kit in 1946. He graduated in 1949 with a Bachelor of Civil Engineering. While at UNB he became a member of the first UNB Soccer Team winning another Provincial Championship.

Immediately after graduation Len joined Public Works of Canada and served in various capacities including Marine Project Engineer, Secretary of the Canadian Engineering Passamaquoddy Power Study, Manager Construction and Engineering, Project Manager Major Projects and Executive Head of the Department retiring in 1981. He later served as Project Manager for major improvements to the Ports of Newcastle and Chatham.

He was very active in the community  serving 3 terms as Mayor of Fairvale, active member of the School Board, was a Cub Leader with the Boy Scouts of Canada for 12 years. He was also a member of the St. Paul’s choir and various committees in the church. He did find time for other activities especially Bridge. He was a Master Contract and Duplicate Bridge player and spent many afternoons and evenings playing cards with his friends.

His most beloved place was at the Camp where he spent time with family and friends, taking in the solitude of the Belleisle Bay, especially the beautiful sunsets. He enjoyed every minute of his retirement but above all else he cherished the time spent with his family. Nothing gave him more pride and joy than his children, grandchildren and great grandchildren.

The days that follow will be painted with memories of all that we shared. Our time together was not one moment but many and the richness of those memories was created by the love with which you filled our world. You have left a void in our lives.

The family would like to express a special thank you to the staff of Ridgewood Veterans Wing for the care of our father.

Family flowers only. Donations to the Ridgewood Comfort Fund, Heart & Stroke Foundation or a charity of your choice will be greatly appreciated.

Arrangements are under the care and direction of Kennebecasis Community Funeral Home, 152 Pettingill Road, Quispamsis (849-2119). At Len’s request no visitation will be held. Funeral Service will be held at St. Paul’s Anglican Church in Rothesay on Wednesday April 3,2019 at 2:00pm. Reception to follow in the Church Hall. Interment will be held at a later date.

Share Your Memory of
Lennox
Upload Your Memory View All Memories
Be the first to upload a memory!