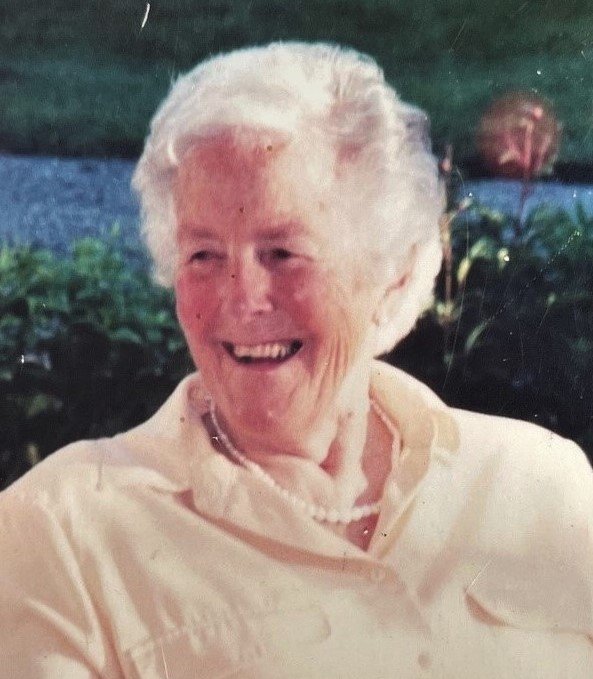 Peggy Harding of Hammond River passed away peacefully at the Turnbull Home in Saint John on May 21, 2021 in her 100th year. Peggy was the wife of the late Harold Harding, who predeceased her in 1991. Born in Montreal on December 18, 1921, Peggy was the last surviving child of John and Olla (LeMesurier) Austin. She was predeceased by her brothers Robert Austin (killed in action in France in WW2) and Dennison Austin and by her sisters Helen Shopalovich and Gwyneth MacNicholl, who was her twin.

Peggy grew up in Montreal. After graduating from high school there, she moved to Washington, DC and worked as an administrator at the British High Commission for the duration of the war. After the war, she returned to Montreal, where she met Harold; he was just back from England after serving in the war and was working in the insurance business in Montreal. A courtship ensued until Harold returned to Hammond River to take over the family dairy farm. Peggy came for a visit to check things out. However, the thought of living on a farm in rural New Brunswick was too much of a culture shock for a city girl and she returned home to Montreal. Fortunately, Harold was persistent and true love won out, or this story would have had a different ending!

Harold and Peggy were married in 1948 and she settled into her role as a farmer’s wife. She knew nothing about farming and little about cooking, and soon found herself milking cows before sunrise, feeding the farm hands, looking after the gardens and raising four children and numerous pets. This would have been daunting to a lesser person but not Peggy. She was a remarkable lady, a wonderful mother and a very kind person. The one challenge of farm life that she could not conquer was her fear of thunder storms; however, she was determined not to pass that fear on to her children. At her insistence, Harold would take the children outside to ‘enjoy’ the storm on the verandah overlooking the Hammond River while Peggy hid inside, with the children being none the wiser about their mother’s fear!

Peggy was very athletic and loved spending time outdoors. Being from Montreal, Peggy enjoyed downhill skiing, so she and Harold drove to Montreal and brought back a used rope tow from her brother Den’s ski hill in the Laurentians (as there was no cash cow on their dairy farm, Peggy and Harold were wonderfully resourceful). Together Peggy and Harold ran the Hammond River Ski Hill on the farm for many years. Harold ran the tow engine and Peggy made the hot chocolate and collected the money. While it was not the biggest hill, it had the advantage of being the only ski hill in the area at the time and many people, including her family, learned to ski there during the day and enjoyed toboggan parties at night. Peggy also enjoyed cross country skiing on the farm into her nineties. In warmer weather Peggy loved to play tennis on the court Harold built for her on the farm; she was an excellent player and was a finalist in a provincial championship.

Picnics and traveling with Harold in their camper van were two of Peggy’s favorite leisure time activities. She also enjoyed picking fiddleheads on one of their islands in the Hammond River. Family get-togethers with the Kelbaugh clan and invited guests at the Kelbaugh camp on the Kennebecasis River each Sunday were also something she looked forward to during the summer months. She and Harold hosted many wonderful (and delicious) Thanksgiving and Christmas dinners at the farm. Her homemade rolls were to die for!

Peggy loved her family and enjoyed her and Harold’s extended family. She is survived by her four children: Lynn McMackin (Gerry) of Rothesay, Geoffrey Harding (Mary Ann Stevens) of Fredericton, Bruce Harding (Beth Myles) of Quispamsis and Leslie Langille of Hammond River. She was predeceased by her son-in-law Mark Langille. She is also survived by eight grandchildren: Holly Owens (Jeff), Andrew McMackin (Jessica), Laura McMackin, Christopher Harding (Maria), Mark Harding (Molly), Melanie Richards, Jeff Myles and Drew Langille; and by eight great-grandchildren: Heath, Nathan and Tessa Owens, Olive McMackin, Margaret (Maggie) and Jack Harding, and Rebecca and Gabriel Richards. Due to her age, Peggy outlived many of her contemporary friends and neighbors but she is survived by her nieces Gwyneth and Nina Shopalovich and Diane Ogborn and by Harold’s nieces and nephews Marjorie (Starr) Robertson, Patsy (Starr) Horne, Hilary Harding and Bill Meredith and cousins Gretchen and Duncan Kelbaugh.

A very independent person, Peggy continued to live by herself on the farm after Harold’s death until her health started to decline a few years ago. She was fortunate to be able to move to the Turnbull Home; the loving care that she received there the last three years was outstanding and a great comfort to the family.

Peggy faithfully attended and supported the Holy Trinity Anglican Church in Hammond River for decades and her ashes will be interred with Harold’s in the Hammond River Anglican cemetery. Due to the pandemic, a private funeral service for family will be held this week.

Arrangements are under the care of Kennebecasis Community Funeral Home, 152 Pettingill Road, Quispamsis (506-849-2119).  In lieu of flowers, donations may be made to the Turnbull Home Foundation or the Canadian National Institute for the Blind.

Share Your Memory of
Margaret
Upload Your Memory View All Memories
Be the first to upload a memory!