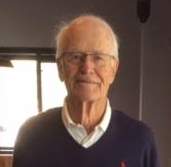 Our community has lost a true gentleman with the passing of Milton Clifford Jones, loving husband and best friend of Joan (Wood) Jones, which occurred on Thursday, May 27, 2021 at the Saint John Regional Hospital. Milton was born on April 27, 1936 in Lincoln, NB and was the son of the late Reud and Idella (Harvey) Jones.

After a 39 year career with NBTel/Bell Aliant, which took him to various cities of  the province, Milt retired to enjoy the simpler things in life. An avid fisherman, he was so pleased to pass along and share the sport with his son and grandsons. He was also quite an accomplished woodworker, taking care and pride in completing many projects, including a prized china cabinet for Joan, and even a couple of fiddles. Milt tried caning just to repair some chairs, but mastered the craft with his usual care and attention to detail. His lasting passion  was music, whether as a listener, or getting together with family  and friends for a “hoedown” and sing-along. Milt was a gifted fiddle player, and it was always special for family and friends to hear a Happy Birthday played over the phone, or even better, to hear it in person.

Milton and Joan were married for 58 years, sharing a life and many cherished memories along the way. Their love of travel and camping took them across Canada and the US, even to the Yukon and Alaska (“best trip ever”), but they enjoyed the beauty of spots closer to home just as well.

Although often quiet and sometimes shy, Milt loved visiting with family, friends and neighbours, for a meal or even just a chat. He and Joan hosted many get-togethers over the years. Milt  was a kind and gentle soul, always considerate of others and willing to lend a hand whenever he could. He will be missed by  many and we are blessed to have had him in our lives. He was one of the good guys.

In addition to his  wife Joan,  Milton is survived by his son Ian of Hampden, Maine, sister Geraldine (Jim) Robinson of Cornwall, Ontario, grandchildren Sunil and Naveen, their mother Kiran, several brothers- and sisters-in-law, nieces, nephews,  and many  friends. (And we can't forget special grand-dog Sammy).

Besides his parents, Milton was predeceased by  son Gregory, brother Fred and sister-in-law Ellen, sister Helen and brother-in-law Burton Smith, and his niece Irene Jones.

Thanks to the staff of SJRH ER, 4CN and 3BN for their kind and compassionate care.

Arrangements are under the care of Kennebecasis Community Funeral Home, 152 Pettingill Road, Quispamsis (849-2119). In keeping with Milton’s wishes, there will be no visitation or service. A celebration of life will be held at a later date when family and friends are able to gather. For those who wish, remembrances may be made to a charity of the donor’s choice.  Online condolences may be placed at www.KennebecasisFH.com

Share Your Memory of
Milt
Upload Your Memory View All Memories
Be the first to upload a memory!