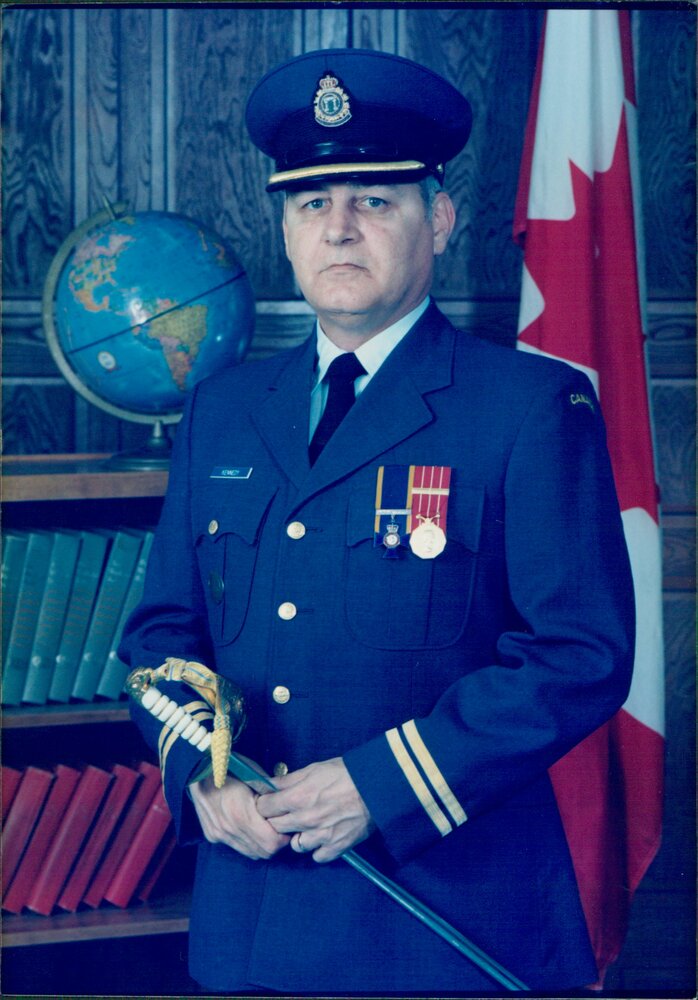 Bob died peacefully on September 9, 2021, at Saint John Regional Hospital, Saint John, New Brunswick. A veteran, Bob served Canada for 37 years in the Royal Canadian Air Force, beginning his career in communication & engineering and later as an administrator. He was commissioned from the ranks in 1982 and retired at the rank of Captain. Bob was honored with the Order of Military Merit in 1983, the second highest order administered by the Governor in Council on behalf of the Canadian Monarch. Bob’s military career took his family throughout Canada. He also served as an assistant to the military attaché at the Canadian Embassy in Oslo, Norway; he was the adjutant of Canadian Forces Base Cornwallis; and ended his career as an administrator for the Canadian Defense Liaison Staff at the Canadian High Commission in London, England.

Bob had many hobbies. In his younger days he played in a band and revived his love of music after retiring from the military, playing saxophone in the Saint Mary’s Band and the local Canadian Forces Militia band in Saint John, NB. While posted in Norway he became an avid sailor and member of the British Joint Services Sailing Club. More recently he enjoyed piloting model radio-controlled planes with the Saint John Model Flying Club. Bob was also a proficient needlepoint artist, creating hundreds of intricate needlepoint artworks.

Bob loved children and was crazy about his two grandchildren, Devin and Daryl. He delighted in talking to children wherever he went.

Born in Halifax, Nova Scotia, in 1941, to Robert James Kennedy (“RJ”) and Kathleen Kennedy (Durling), Bob joined the military when he was 17.

Bob met Emma in 1967 while Emma was visiting relatives in Sioux Lookout, Ontario where Bob was posted. They married in 1968 in Cleveland, Ohio where Emma relocated from to Canada. Bob and Emma enjoyed home improvements and owned a century-old bed & breakfast in Nova Scotia which they renovated together.

In keeping with Bob’s wishes, there will be no visitation or funeral service. Arrangements are under the care and direction of Kennebecasis Community Funeral Home, 152 Pettingill Road, Quispamsis (506-849-2119).
If you wish to make a donation in Bob’s memory, the family suggests donating to Saint Mary’s Band or the Heart and Stroke Foundation of Canada.

Share Your Memory of
Captain Robert
Upload Your Memory View All Memories
Be the first to upload a memory!