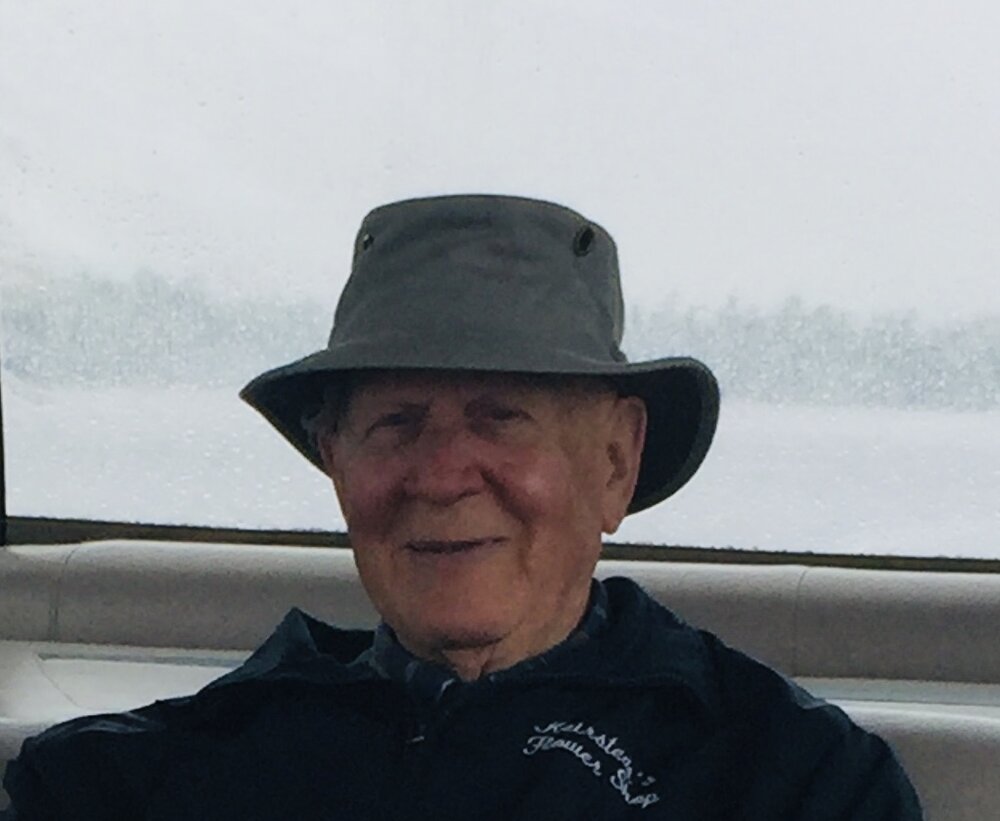 It is with great sadness that the family of Fenton Keirstead husband of Gladys (Ayres) Keirstead must announce his passing on Sunday November 21 2021 at the St. Joseph’s Hospital, at the age of 90.  It is difficult to say good bye to someone who meant the world to us.

Born on May 4, 1931, in Saint John, NB, he was a son of the late Harold and Mabel (Anthony) Keirstead. Fenton spent his early life with his family in Hampton until he started his career with the military at quite a young age. During his time in the military, he met his wife Gladys and they began their family. Together they travelled to the many places he was stationed such as Germany, Ottawa, Montreal, and Rothesay, where he eventually settled down. He served for 40 years before retiring from the Canadian Armed Forces as a Major in Logistics with Finance Specialty, and was part of the Military Reserves for years thereafter. After retiring from service, he joined the family business - Keirstead's Flower Shop in Saint John and ran it together with his good friend & business partner, Mike Upward.

Outside of his career, Fenton was very active in his community. He volunteered in many organizations serving at one point as the president of his local Crime Stoppers, a local Kiwanian, and Vice President of PROBUS, in which he was still involved. Fenton valued relationships with people, and made many connections throughout his life.  He had an uncanny ability to make all those around him feel comfortable, and was always up for a good debate.

To his family Dad/Grampy will forever be known as the “Master Chef” for his huge roast beef Sunday dinners and other special occasions. He loved cooking big meals and having lots of family here to enjoy them. There was always room at his table. In the last number of years, he also truly enjoyed his regular Saturday games night with his family. He was especially good at table talk, when in fact, table talk was not allowed! He always seemed to rack up more Sequence victories!

Besides his loving wife, Fenton is survived by his children; Gary (Silvana) of Markham, ON, Brian (Connie) of Quispamsis, and Beverley (Danny) of Aylesford Lake, NS, grandchildren; Cristina (Paul), Jennifer (Anthony), Heather (Matt), Diana (James), Jessica (Jared), Mark, and Andrew (Cindy), seven great grandchildren, brothers; Winston (Marilyn) of Fredericton, and Vernon of Hampton as well as several nieces and nephews, extended family, and many special friends. He will be missed by all who knew him.

Fenton was predeceased by his parents, brothers; Robert and John “Jack” (Marie), sister Marilyn Law, daughter in law Cynthia, and his daughter Deborah in infancy.

Resting at Kennebecasis Community Funeral Home, 152 Pettingill Road, Quispamsis (506-849-2119) with visiting on Friday from 2 - 4 PM and 6 – 8 PM. A Memorial Service celebrating Fenton’s life will be held at Kennebecasis Community Funeral Home Chapel on Saturday, November 27, 2021 at 1:00 PM. For those unable to attend, the service will be livestreamed and can be viewed by visiting Fenton’s obituary at www.kennebecasisfh.com

Due to Covid-19 health measures placed on indoor gatherings by the Government of New Brunswick, all those 12 and older attending the service will be required to show proof of vaccination and a piece of a government-issued ID or proof of medical exemption. Masks are mandatory for both visiting and the funeral service.

For those who wish, remembrances may be made to a charity of the donor’s choice.

Every year once it got cold enough it was time to make stew. Grampy would make a pot of stew so big that it wouldn’t fit in the fridge, so we had to wait for it to be cold enough in his “cold room” the cellar. We’d then eat stew all week, and the flavor would build every day.

This may not be an exact recipe but could be considered an homage – I don’t think he had one either, once you’ve done something for long enough it becomes engrained.

Grampy’s preference: at least when I knew him, he had an eye for quality meat and would often get beef short ribs – they are on the expensive side, an alternative is to use stew meat or cut a roast beef into chunks.

Chop the vegetables to your desired size.

½-3/4 inch cubes for potatoes and Turnip.

Cut the onions into strips

Grampy’s preference: he liked big chunks of vegetables, because he liked the to be able to taste each one, especially Onions! He would leave the onions whole in the stew. The other reason for this is that Grammy – did NOT like all the same vegetables – and could be a picky eater, the bigger he left the chunks the easier it was to avoid the vegetables she didn’t like and ensure that the bowl was not sent back to the kitchen!

If you are cutting your own beef, cut it into somewhere in the range of 1x1 to 1x2 inch cubes.

Coat the beef cubes in the combined mixture and set aside.

Heat 1 TBSP oil in the stock pot over medium heat.

In a frying pan heat 1 tbsp of oil over medium-high heat. Sear the beef on all sides – this shouldn’t take long if your oil is hot enough. The beef does not need to be cooked through – it will finish cooking while in the stew. With this much beef it will likely take multiple times of filling the frying pan – add more oil as necessary, the beef will absorb the oil.

Once the beef is braised you can add it to the stock pot.

Then pour some of the beef broth into the frying pan and deglaze the pan. Leave it on the heat for a moment using a spatula to loosen anything stuck to the pan, then pour the broth into the stock pot.

Add the rest of the beef broth into stock pot.

Add the rest of the vegetables

Grampy’s preference: he liked to cook the potatoes separate from the stew and then combine them when he was eating it, he thought the potatoes were too mushy after being cooked for so long if they were in the stew.

Add enough water to cover everything

Grampy’s tip: you can use water boiled from a kettle in this step, this will shorten the time it takes to bring the stew to a boil.

Add the rest of the spices – including the beef concentrate (I would start with 1-2 Tbsp. and then add more only if needed)

Bring the Stew to a boil – boil for at least an hour – more will give more time for flavors to mingle.

Periodically taste the stew and decide if you need to make an adjustment.

If it needs more seasoning, add as desired, waiting a few minutes between re-tastings.

If you think it’s over seasoned, you can add a flour slurry (mix 1tbsp of flour with 1-2tbsp of cold water).

If it’s too thick – you can add additional water.

If it’s too thin you can add a flour slurry (mix 1tbsp of flour with 1-2tbsp of cold water).

You can repeat these steps as necessary until you get your desired stew!

This was one of Grampy’s favorite winter dishes.    If you have your own cold room, you can give Grampy’s method a try, the stew will build in flavor. You can transfer it into a smaller pot and heat it when you need it. You can also freeze some of the stew, or split int into containers or smaller pots if you need to keep it in your fridge.

Share Your Memory of
Fenton
Upload Your Memory View All Memories
Be the first to upload a memory!