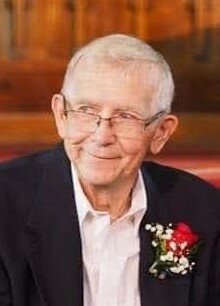 It is with heavy hearts and great sadness that the family of James “Jim” Frederick Jeffrey share his peaceful passing on Sunday, December 5, 2021 at Kings Way Care Centre, after a courageous battle with Parkinson’s Disease. Jim was the loving husband of Joyce (Bailey) Jeffrey for 58 years.  He was born in Saint John, NB on August 9th, 1941 and was the devoted son of the late James and Alice (Lee) Jeffrey.

Jim was employed as an electronic technician with NBTel for many years. He was well-respected, kind and a soft-spoken man. Jim was a member and Trustee of Kennebecasis Baptist Church and was known as a “Jack of all Trades”, spending many hours doing God’s work at the Church. Jim was happiest at the camp on the Belleisle Bay with his family, especially his Granddaughters. He enjoyed fishing and had a passion for his Ham Radio.

Jim is survived by his wife, Joyce, his daughter Lori Carr (Wayne,) and son Chris (Christina), sisters; Sandra Smith and Heather Winters (Gary), grandchildren; Bailey and Ashley Carr, nephews; Gary and Steven, and nieces; Shari and Jillian. As well, Jim had a very special relationship with Karen Downie and Jacalyn MacLean, who he treated as Daughters. Besides his parents, Jim is predeceased by his nephew Scott Winters, and brother-in-law David Smith.

Special thanks to Kings Way Care Centre and their wonderful staff, for their loving care of Jim. Arrangements have been made under the care and direction of Kennebecasis Community Funeral Home. Memorial Service to celebrate Jim’s Life will be held at Kennebecasis Baptist Church, 383 Hampton Road, Quispamsis on Thursday, December 9, 2021 at 3PM with visiting from 12-2PM. Interment will take place at Erb’s Cove Cemetery, at a later date.

To honour Jim’s memory donations to Kennebecasis Baptist Church, would be gratefully received.

Share Your Memory of
James
Upload Your Memory View All Memories
Be the first to upload a memory!