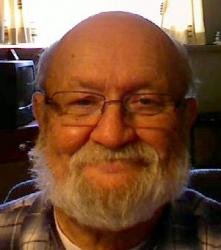 Michael Matthew Fitzgerald of Quispamsis, husband of the late Frances (Doten) Fitzgerald, passed away peacefully on Thursday, January 30, 2014 at the Saint John Regional Hospital, surrounded by his family. Born on April 2, 1937, he was a son of the late Kenneth and Gertrude (Pelrine) Fitzgerald. Mike attended St. Vincent's Boys School and then St. Stephen High School. He enlisted in the Royal Canadian Air Force, retiring in 1979. He joined the NBEPC at Point Lepreau, where he retired in 1993. Mike was an avid beer and wine maker, he enjoyed woodworking, gardening and traveling. He was a member of the Royal Canadian Legion, Branch #58, Rothesay and the Opimian Society. Survived by his sons, Frederick (Joan) of Winnipeg, MB and Michael (Sherill) of Winnipeg, NB; daughters, Maryam Doucette (Carl) of Calgary, AB and Kimberly Wilcox (Marty) of St. Albert, AB; his brother, Herb; sisters, Pat Yardley and Sr. Judith Fitzgerald; grandchildren, Mason, Marcie, Myles, Leana, Michael, Kimberly, Wesley, Dean, Taylor, and Hailey; great grandchildren, Emily, Jaxxen, Bowen, Charlie and Vincent, as well as several nieces and nephews. Mike was predeceased by his brother, Fred and sister, Mary Joan Gates. Resting at Kennebecasis Community Funeral Home, 152 Pettingill Road, Quispamsis (849-2119) with visiting on Monday from 6 - 8 PM. Mass of Christian Burial will take place on Tuesday, February 4, 2014 at St. Mark's Catholic Church at 10:00 AM. A Royal Canadian Legion Service, tribute to a Veteran will be held Monday evening at 6:00 PM. Interment to take place at a later date. Remembrances may be made to the Diabetes Association of New Brunswick.

Share Your Memory of
Michael
Upload Your Memory View All Memories
Be the first to upload a memory!