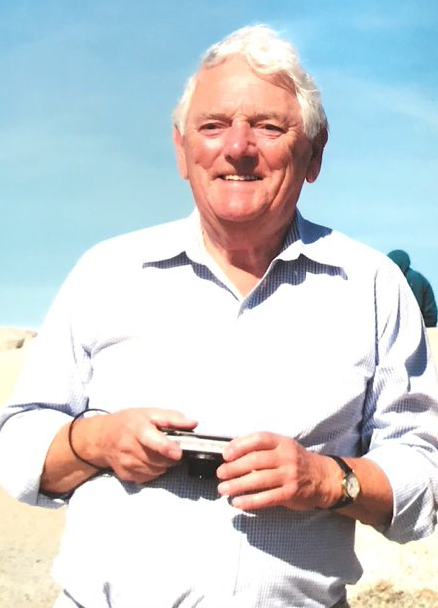 With deep sadness the family of Barrie Allport, husband of Josephine (Judy),  announce his peaceful passing on Saturday, July 27, 2019, at the Kingsway Care Centre.

Born on July 29, 1930, in Chesterfield, Derbyshire, England, he was the son of the late Harold and Violetta (Rogers) Allport.  Barrie married Judy in 1954 and they spent 65 wonderful years together.

Barrie’s work passion was sales and he excelled at it.  He moved his young family to Canada in the late 60’s in pursuit of furthering his prospects and spent the majority of his career with JD Irving Ltd. in international trade, becoming well respected in his field and retiring in the late 90’s

This career choice also encouraged his love of travel.  He and Judy had opportunities to journey to many parts of the world together by air, land and sea and shared countless joyful experiences.  Barrie also had a keen eye for photography, capturing these events on film and ensuring these memories would be everlasting.

Barrie was a devoted family man and a proud grandfather and great grandfather.  He had a bond with his young grandchildren and great-grandson but all children would bring out the best in him.  He had a great sense of humour and was always ready with a joke and a smile.

Besides his wife, Judy, Barrie is survived by his son Gary (Charlene) of Cleveland OH; his daughter Carol Duplisea of Halifax, NS; his grandchildren, Stephanie, Michael, Adam and Christopher; and one great-grandchild Caleb. Sadly, he was predeceased by his youngest daughter, Linda, in 2004.  He was also predeceased by his parents; sister Peggy and his brother-in-law Owen Justice.

The family would like to thank all of the staff and volunteers at the Kingsway Care Center for the love, kindness and compassion during Barrie’s 4 month stay with them.

Arrangements are under the care and direction of Kennebecasis Community Funeral Home, 152 Pettingill Road, Quispamsis (849-2119).  In keeping with Barrie's wishes, a small service will be held on Wednesday, August 7th at 11:00 AM followed by a reception with light refreshments. Donations may be made to the Alzheimer’s Society or the charity of the donor's choice and online condolences may be placed at www.kennebecasisfh.com

Share Your Memory of
Barrie
Upload Your Memory View All Memories
Be the first to upload a memory!